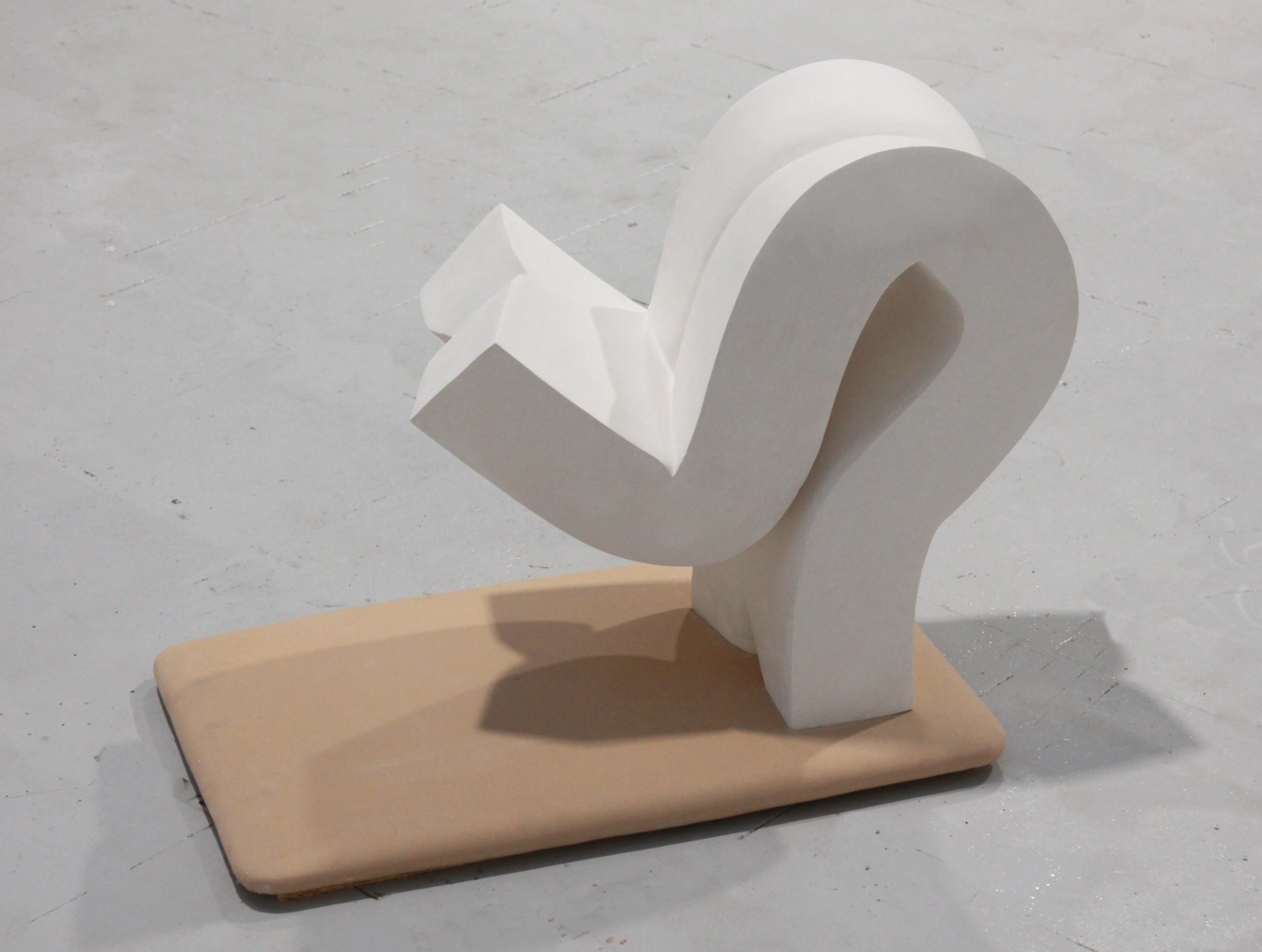 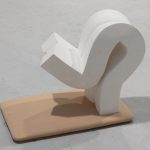 The exhibition brings together for the first time the work of Lawrence Calver (UK,b.1992), Mia Dudek (Poland, b 1989) and Bence Magyarlaki (Hungary, b.1992). Through the medium of painting, photography and sculpture the three artists are constructing a visceral language, bringing materiality and a heightened sense of bodily awareness to the forefront of their work. A tactile immediacy seems to unite the three art practices, from the weave of the stitched fabric constituting the body of painting, through the pores of stretching skin extending the realm of the visible to palpable emulsion, to the folds and crevices that pull corporeality into the body of sculpture. Materials marked by previous histories

are re-approprited in the making process of the artists: found textiles, used beds, condoms and balloons, marks and wrinkles of human skin are some of the elements put to use in order to guide the viewer to look beyond the surface, into the very structure that composes and constructs fibre, matter, body.

Lawrence Calver takes the material support of painting– the canvas – and sews, bleaches, stretches or stains the fabric to create his compositions. Starting with an amorphous collection of juxtaposed pieces, varying textures and tones, the skin of painting is gradually assembled as a patchwork that re-works the rectangular containment of the painterly image. From afar, Calver creates a harmonious, minimalist stillness with his compositions. With a more upfront, tactile observation a space of flexibility and rhythmicality is revealed: lines stretch and edges curve, warping the vertical and horizontal striation into an expression of independent material identity that each painting thus surfaces.

By working with materials that already have a history – lost in the weave and textures of his creations – Lawrence invites the viewer on a forensic journey. He asks that the audience entertains an idea of a life before the work, a story from manufacture to reclamation that led to to each individual outcome.

Mia Dudek investigates the idea of a broken physicality between individuals. Photographing fragile sculptural shapes assembled from solidifying liquid materials in conjunction with the surface of skin, Dudek represents an abstracted, fragmented body, sometimes split into two, detaching and reforming it into new structures. The veins, moles and other structural body elements in he Skin Studies conjure a sense of fragility and allude to a translucent and corporeal surface that has sensitivity to touch. The artist’s ongoing attempt is to represent alienation in depictions of compromised human physicality. Her works are shot with a sense of claustrophobia – of ourselves being repressed by our bodies, and our bodies being repressed and contained by the physical world.

Mia Dudek's works have one mutual and strong concern - brutality, violence and power of the architecture; representing hermetic exteriors and their horizons endlessly bounded. Restrictive environments are inescapable but also contain otherwise formless and fluid bodies that threaten to spill over the borders of inanimate structures.

Bence Magyarlaki constructs a language of sculpture that expresses the psycho-sociological aspects of being contained in one’s own body. He is interested in the external and internal forces that hold the body in place in a socially and psychologically produced sense of selfhood and how this conditioning manifests in the ways the body stands, gestures, behaves and feels. The Contortionists series explores a limit situation in the performance of a body- a point of physical challenge in flexibility that pushes one’s body into a conscious object of awareness. This is a point in the process of body image production where the body is recognised as by being owned by its subject. The plaster surface of Magyarlaki’s work encapsulates soft sponge that comes from recuperated chairs, sofas and beds. These found parts carry traces of the bodies that once used and abandoned them. The sculptures construct their own malleable social-gestural body out of these found intimacies, bringing into question how the ownership of our bodies depend on an ongoing social, situational, performative practice.

The exhibition poses a phenomenological question on how in a contemporary society of isolated individualism a body is constructed, felt and lived in. The various methods explored by the three artists bring a variety of social-political, psychological and aesthetic responses to the question of materiality and corporeality, and an array of possibilities for reinventing and mobilising the space of our bodies in order to change and re-appropriate the space of society.