Berke Doğanoğlu As Adam, Early in the Morning (Part2) 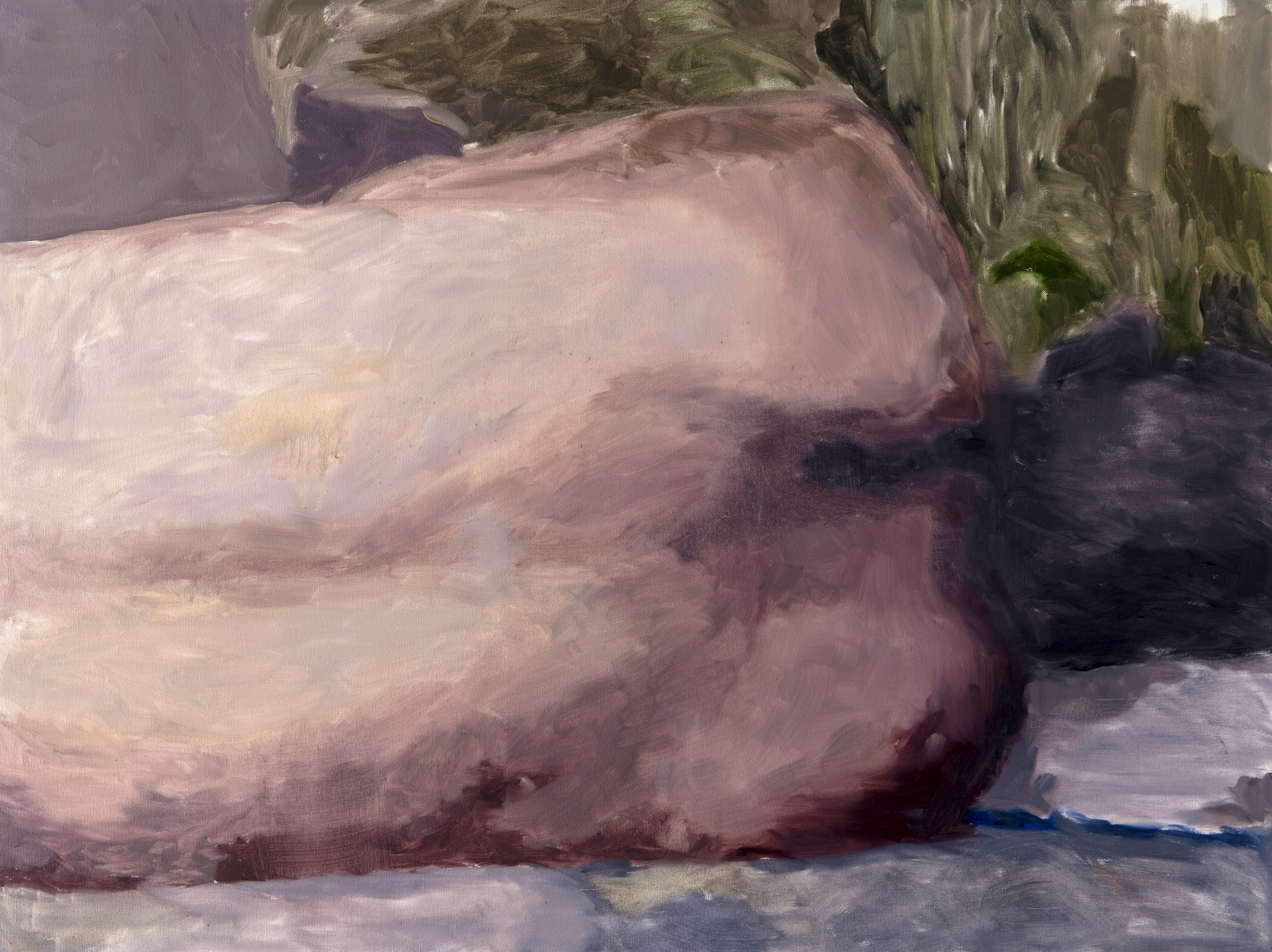 There must be a kind of painting free from form –object– representing nothing, narrating nothing, starting no legend, like music. This painting must evoke only those inexpressible kingdoms of the soul, realms where dream becomes thought, grain becomes being. —Michel Seuphor / Clarice Lispector, Stream of Life

Berke Doğanoğlu’s solo exhibition As Adam, Early in the Morning encompasses two selections of his paintings produced in the last five years. Programmed to be presented in two exhibitions, the first of which was open between June 9–July, 25 and the second is taking place in July, 7–25.

The exhibition brings together the artist’s oil paintings focusing on the corporeality of human, tackling the being of human as a body. In these works, with his way of applying the paint on canvas, Berke depicts the skin, flesh, human body as fragmented, invaginated, folded surface depths. These paintings tend towards a depth that does not emerge from optical perspective, but from the depth of color, from the depth of the living being of the skin appearing on the surface.

As Adam, Early in the Morning suggests images of the human body appearing with its stratum, layers, folds, resembling a topography, the body of earth explored through its surface. With this gesture, the body’s historical and social narratives are taken in parenthesis in a way and its relation with corporeal existence is unfolded. In these paintings, we encounter fragments of bodies bearing suggestions of thoughts tackling the proximity between
the materiality of color and paint, and body as a material being; while bringing closer the being of brush strokes to the being of gestures. Exhibited works echo this idea: Body is a material thing. It is material with its constituents, tissues, organs, structure; its physical presence; its existence with and separate from other material beings in certain distances; its ability to get close to those other material beings; its ability to cross the distance between, to get in contact, to touch, to be touched. It is open to be affected
in ways different than other material beings. In time, it is being re-organized through transformations. It gets transformed towards the openness of a future; it gets wounded, healed, it weakens, it is empowered, it tightens, relaxes, hardens, softens. As Adam, Early in the Morning, reading this material openness with the painting’s and body’s potentials, invites the viewer to feel the color’s, paint’s power to affect, to get affected, and to transform; and the body’s power to affect, to get affected, and to transform, together. Instead of narrating a story, it unfolds as an invitation for encounters with the material, bodily ground that makes many things, also stories, possible and invites to seize the plain vitality of this ground.

In As Adam, Early in the Morning, the eye, while meandering on every canvas, on color taches, is attracted to what is left in dark, what is dark. Those darknesses are not bleak pits: every single one of them is just a void with no light shed. Those are felt as voids holding the artist’s decision to care for happy and dreadful, desiring and painful, powerful and vulnerable aspects of being a body. This is a care to protect, to watch for the openness of being a body. A care without representing, determining, trying to reach,
without looking for the instances of transformation, without trying to conceive the moments of transformation: Caring for the openness itself. Proceeding from one painting to another in the exhibition, we come across fragments posing questions on darkness with no light shed and also on being visible with light, on being able to see and to be seen. The notion of “to be seen” frequently discussed in public sphere with its political connotations, is traversed in these paintings through intimacy. The habits of seeing, ways of seeing, which have been generally organized relying on the conceived unity and functionality a body; gets altered and gains new layers on behalf of the fragmented. These paintings, in a sense, turn their backs to habits of seeing that positions things in a narrative: signifying, locating, hasty ways of seeing. They propose an invitation to feel the openness of a carnal, non-idealized body, eluded from its symbolic and spiritual loads.

The exhibition also asks questions on social construction and composition of ways of seeing the body; with its title As Adam, Early in the Morning, through its realm of connotations, it also brings to mind thoughts on the notion of beginnings. It invites us to look at the presence of a possible beginning which is almost impossible to detect; to look at the ways of being of that has already begun, already opened; and that is, already there, in the
non-traversability of reasons; of the materiality, corporeality. Berke’s paintings are interested in the body by gaining ground to the effects of daily life’s ways of organization of bodies and of looking at bodies. Works in this exhibition are pursuing questions on the potential of this ground: While sleeping like in the painting “Sleep”; just woke up like in the painting “Nightgown”; while embracing like in the painting “Embrace”; while lying naked like in the painting “Body”; while clutching someone’s hand like in
the painting “Clutch”; after having a bath like in the painting “Bather”, how is the human body, bodies, in those moments in which the body is a bit alien to its public being. With what other desires intersects the desire of thinking the human as a bodily being? What kind of a desire it suggests on the relation established with life?

In those paintings, with striking brush strokes in shades of skin, touching a body, touching bodies, their relations to themselves, to each other, and to the artist do not give themselves away in one glance. They make us feel that to relate to an embodied human being, to a body, to desire it, to be attracted towards it, to bond with it, to enter into relation with life itself via this bond, by opening oneself to desire as an affirmative orientation power, have many ways. Berke’s paintings exhibited in As Adam, Early in the Morning are a suggestion of an encounter by contemplating on this multitude. Those paintings, making us feel the power of intimacy with another body, with the multiplicity of sexual differences, with a desire to have pleasure together; and also they invite to rethink the power of an intimacy that is in desire of a
sheltered embrace of compassion. The artist’s paintings in the As Adam, Early in the Morning are also interested in the power of the bond with love, caring, looking, protecting, watching for; in their relation to desire. That is a desire oriented towards protecting the relation established with the openness of being a body, with being a bodily existence. A desire to the primordial potential that makes new ways of living, loving and interacting possible, with the ethical and political questions, through anticipating the realm where the unforeseeable affective coexistence of bodies, their contacts, collisions, reactions, influences are unavoidable.