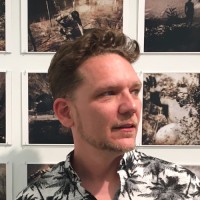 Jasper de Beijer was born in Amsterdam, The Netherlands in 1973. He completed 2 art schools; from 1992 until 1996 he attended the program at the Amsterdamse Hogeschool voor de Kunsten, where he graduated in ’96.

Then he followed the exam year at the Hogeschool voor de Kunsten Utrecht, department Autonomous Design, where he graduated in ’97.

In the academy days De Beijer was a fanatic sketch artist, where he used scale models and staged sets as study material for drawings and paintings.

His first official complete photo series, ‘Buitenpost’, is a clear step to take the models and staged sets as a starting point for manipulated photography. Since then De Beijer has done a number of seven projects, all of them built from the ground up in his studio.

De Beijer has had a number of solo and group exhibitions, and is part of a large number of collections, like the Bank of America and the Rabobank collection.

For a few years now De Beijer is also represented in the international art market, where his work is shown in places like the Pulse New York, the Scope Miami, the Photo LA and other places. More info can be found in the ‘Solo Exhibitions’ and ‘Selected Group Exhibitions’ sections.

Jasper de Beijer is represented by